Over the past few decades, the incidence of fibromyalgia has exposed and is now present in approximately 12 to 24 million Americans. If you are suffering from achiness, cognitive impairments, muscle spasms, digestive issues, migraines, fatigue, or tenderness, you may be experiencing fibromyalgia pain.

And if you suffer from fibromyalgia, then you already understand just how severe the widespread pain can become and how debilitating it can be to live with the symptoms. You hurt all over even when you are not sick. And the pain doesn’t go away. Your pain volume is always turned up, like music blasting on a radio.

Fibromyalgia is a condition for which there is no clear cause, but there are risk factors with which it is associated.

Who is at Risk for Fibromyalgia

Researchers have identified characteristics that may increase an individual’s chances of developing fibromyalgia. These risk factors include: 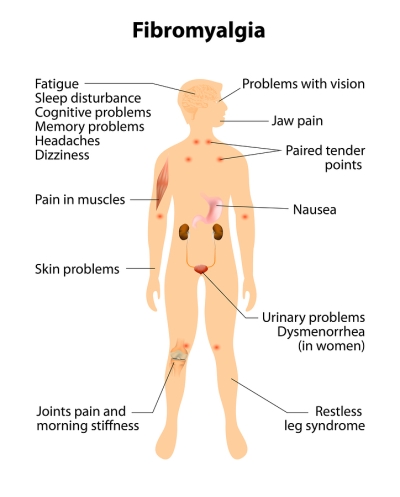 While some people diagnosed with fibromyalgia are associated with one or more of these characteristics, others identify with none of them. Additionally, some women have fibromyalgia without underlying conditions, while others suffer from either rheumatoid arthritis, systemic lupus erythematosus, osteoporosis, and other autoimmune diseases.

People Who Are Female

Fibromyalgia is diagnosed in women far more often than in men. It’s been theorized by researchers that because women may naturally have lower serotonin levels, they are more prone to developing this condition. Serotonin is a brain neurotransmitter that can cause calming and anxiety-reducing reactions in the body.

People Who Have a Genetic Tendency

It is thought by some medical researchers that like similar diseases, fibromyalgia may have a genetic component involved with its development. This theory posits that people who have genes that react more dramatically to certain stimuli may experience pain in certain situations when others would not.

People Who Are Under Stress

Some researchers who study fibromyalgia pain theorize that poor physical condition, stress, or micro muscle traumas create the disease’s cycle of pain and fatigue. The chronic pain caused by fibromyalgia may cause feelings of depression and anxiety, and worsen the individual’s symptoms.

People Who Suffer from Sleep Disorders

Fibromyalgia sufferers often experience non-restorative sleep. Some researchers believe that conditions like insomnia can lead to lowered serotonin levels in the body, which can increase its sensitivity to pain. Sleep deprivation can cause reduced pain thresholds in women and may be linked to the development of fibromyalgia.

It isn’t known exactly what causes fibromyalgia, although there are several convincing ideas. Because fibromyalgia is not well understood, it often doesn’t respond well to conventional medical treatment.

Doctors not familiar with the illness, even excellent physicians, have difficulty making sense of this wide array of symptoms. For effective fibromyalgia pain relief, consider visiting a fibromyalgia specialist.

Beyond giving us energy there are other benefits to getting enough sleep including:

Proper nutritional support is essential for everyone’s general well-being. For fibromyalgia patients, therapeutic vitamin and mineral treatment may help relieve symptoms. A fibromyalgia doctor might recommend that you begin taking vitamin D supplements. Some studies have suggested that vitamin D can be helpful in managing muscle pain and supporting nerve health, although it’s by no means a “miracle cure.”

In fact, some researchers have noticed that some fibromyalgia patients display lower than ideal levels of vitamin D. Other important vitamins and minerals is vitamin C and magnesium. Fibromyalgia patients may be found to be deficient in magnesium in particular, which plays an important role in cognitive function and muscle functioning. Magnesium deficiency can increase the risk of muscle spasms, twitches, and tics.

Treating candida overgrowth may help patients with fibromyalgia manage their symptoms and improve their overall wellness. One method for treating candida is sublingual immunotherapy. We typically also include in our treatment method dietary changes, IV vitamin therapy, and antifungals.

A healthy is extremely important when it comes to treating fibromyalgia. This doesn’t mean you have to cut out all the foods that might be bad or eat a diet that is impossible to follow. Simply consume a diet that is reasonably healthy and low in added sugar. Here are some guidelines for eating healthy:

Another option for achieving fibromyalgia relief is injections of gamma globulin. This is a type of therapy that can be helpful for boosting the immune system. The injections contain purified antibodies that can offer short-term protection.

Exercise can effectively help prevent or treat just about every health problem out there including fibromyalgia. It is not necessary to push for high intensity. When being treated for any type of debilitating illness, reconditioning is a critical part of getting well. Doable exercises include walking, gentle yoga, and tai chi. As you go through the other treatment protocols listed, you’ll notice that your body starts making the energy needed to condition.

Old mindsets are difficult to change. First and foremost, stop thinking it’s all in your head. And if your regular doctor(s) don’t believe you are experiencing a serious health issue, reach out to a doctor who specializes in diagnosing and treating fibromyalgia. Most physicians who know how to help fibromyalgia are considered holistic medical doctors.

Holistic doctors usually have advanced training in using natural therapies and also spend a lot of time exploring scientific literature. Plus, they allow the longer visits needed to treat these problems. Fibromyalgia is treatable by holistic doctors. But take note that treatment can be complicated and time-consuming.