What is Chronic Fatigue

Some holistic doctors believe the syndrome is caused by a viral infection, like Epstein-Barr, human herpes, or leukemia. It might also be caused by immune system impairment, a hormonal imbalance, or persistent or severe psychological stress. The primary symptoms of chronic fatigue syndrome are intense and pervasive fatigue, loss of memory, difficulty concentrating, a sore throat, enlarged lymph nodes, unexplained muscle pain, joint pain, headaches, and un-refreshing sleep. The syndrome typically affects women in their 40s and 50s who are subject to extreme stress or psychological trauma.

Who Gets Chronic Fatigue – Are You At Risk

According to the CDC, anyone can get chronic fatigue syndrome. While most common in people between 40 and 60 years old, the illness affects children, adolescents, and adults of all ages. Among adults, women are affected more often than men. Whites are diagnosed more than other races and ethnicities. But many people with chronic fatigue syndrome have not been diagnosed, especially among minorities.

Chronic fatigue syndrome (CFS) is a complicated, debilitating condition that typically causes patients to function at a much lower level than they previously did. CFS is characterized by intense exhaustion that is not relieved by rest. Patients may struggle with other symptoms in addition to fatigue, including physical and cognitive problems.

The most common symptoms of chronic fatigue include 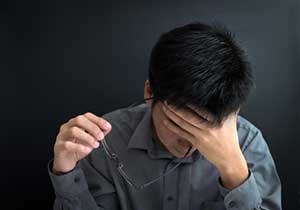 The most prominent physical symptom of CFS is fatigue. The extreme exhaustion may worsen after mental exertion or physical activity. It’s also not uncommon for patients to experience malaise, or a general feeling of being unwell, particularly after physical activity. Patients may also suffer from persistent muscle and joint pain that cannot be explained by physical exertion or the presence of other medical conditions. CFS can cause sore throat, headache, and problems sleeping. Upon undergoing a physical examination, a homeopathic doctor may determine that the patient has enlarged lymph nodes in the neck or armpit.

Cognitive problems are not unusual among patients with CFS. Patients may experience concentration problems that interfere with their productivity at work or school. They may suffer from impaired short-term memory and impaired memory retention. One way this may manifest is having difficulty finding the right word in conversations. Patients may feel disoriented or confused. In addition to the physical fatigue associated with CFS, patients may suffer from mental fatigue or brain fog. Brain fog is more severe than just a momentary lack of concentration abilities. It refers to persistent, sluggish thinking patterns.

Although the cognitive and physical symptoms are most characteristic of CFS, some patients will experience neurological issues as well. For example, a patient might experience frequent dizziness and balance problems. He or she might faint or have difficulty maintaining an upright position. Visual disturbances are possible, including blurry vision, eye pain, and increased sensitivity to light. It’s important to tell your doctor about all of the signs and symptoms you’re experiencing, even if they do not appear to be related to your fatigue.

Watch this video to learn more about the effects of chronic fatigue syndrome. Additional symptoms of this condition can manifest as depression, aches and pains, memory loss, extreme exhaustion, and enlarged lymph nodes.

Getting enough restorative sleep and getting aligned with your circadian rhythm are important steps for managing your chronic fatigue. When you watch this video, you’ll learn that most adults need about seven to eight hours of restorative sleep each night. However, even if you’re staying in bed for that length of time, you might not necessarily be sleeping the whole time.

This doctor offers some tips for getting to sleep and staying asleep. He suggests getting evaluated for sleep apnea if you have persistent snoring. It’s also a good idea to avoid alcohol and caffeine during the hours leading up to your bedtime. Reducing your fluid intake in the evening will help reduce nighttime awakenings. Other ways to improve your sleep include investing in blackout curtains and maintaining a slightly cool temperature in your bedroom.

Why Chronic Fatigue Suffers Need to See a Specialist

In The New York Times, Dr. Lisa Sanders’ column Diagnosis made me realize how important it is for a patient with Chronic Fatigue to see a specialist.

The article, Think Like a Doctor: Weaker and Weaker Solved!, was about a 19-year-old male who struggled for almost 2 years with debilitating fatigue that went undiagnosed. He went to the emergency room several times where he was told he had a virus and was dehydrated. He was given IV fluids and sent home to rest. However, his symptoms involved not just fatigue but nausea and stomach discomfort as well. He also had a low blood pressure which is somewhat unusual for a young man. The clue to his story was that one of the ER doctors noticed his sodium in his blood was low and told his mother that he should eat more salt. His mother was perplexed. She said he seemed to eat a ton of salt: she always found salty crackers in his bedroom. Eventually, the young man was taken to a specialist and diagnosed with Adrenal Failure, also called Addison’s disease.

What Is Addison’s Disease?

Addison’s disease’s most famous patient was President John F. Kennedy. President Kennedy almost died while undergoing back surgery at New York Hospital. It was realized his adrenals weren’t functioning and his blood pressure bottomed out. During the recovery from his back surgery, he was put on adrenal hormones which he required for the rest of his life.

Adrenal failure presents with a myriad of signs and symptoms. A doctor observing an Addison’s patient might be impressed by a full body tan, especially if it occurred in the non-summer months. The reason these patients are tan is that the lack of adrenal hormones causes the secretion of ACTH from the pituitary which leads to melanosis (tanning of the skin). Only a few diseases present with a year-round tan.

Another clue to this patient’s problem was the low sodium and high potassium levels in the blood. The imbalance of these electrolytes is due to the missing adrenal hormones that are needed to keep the proper levels. The low sodium makes the patient crave salt to try and replace the body’s missing stores. Patients with Addison’s disease can go intocrisis and die- from an infection, or from surgery. This is why it is so important to evaluate the symptom of fatigue. The good news is that Adrenal failure can now be treated via oral replacement therapy with cortisol and if necessary Florinef.

One of the medical directors at my hospital used to tell the staff that patients who complained of fatigue were more or less hypochondriacs. The physician was a well-known medical researcher, but he didn’t particularly like listening to a patient’s history (he preferred meetings where doctors sat around and presented cases like Dr. House). The nuances of the diagnosis in “Oversalted” would have been completely lost on him, considering he wasn’t willing to dive deep into the history of a fatigued patient.

However, at Mitchell Medical Group we are “in the trenches” with our patients, searching for clues to explain their underlying fatigue. We use a variety of diagnostic blood tests to uncover unusual causes of fatigue, and we have an array of Vitamin therapies to help bolster our patient’s health until the fatigue resolves.

This site contains affiliate links to products. We may receive a commission for purchases made through these links.