I’ve seen 2 dramatic cases of Lyme disease this past month. Both patients presented with joint pain, swelling and rashes. Lyme disease is especially common during the summer months when people are outside more, but even after the summer, cases can develop that didn’t present with apparent symptoms.

The Not Always Obvious Symptoms

I’ve spoken to dermatologists who have seen the classic Bull’s eye rash of Lyme disease, but who have also told me that they are seeing many different types of rashes not usually associated with Lyme disease. My 2 patients both had atypical rashes: one had a blotchy red rash over her lower legs that is medically described as petechial (because there is blood in the capillaries); the other patient had hives (because it looks like welts) or the medical term urticaria. These are very different types of rashes but each patient also had swelling and joint pain which gave clues that Lyme disease or some other tick-borne disease was the cause. 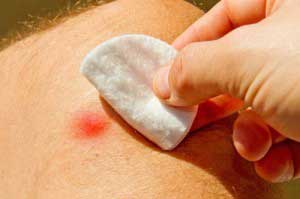 Both patients were treated with the antibiotic Doxycycline, which is the appropriate medication to kill the bacteria, Borrelia Burgdorfer, inside the tick. However, not everyone responds effectively to the treatment. One of my patients did clear very quickly on the antibiotic, but the other patient continued to have symptoms.

Although medical researchers have been debating whether the infection from the tick remains hidden somewhere in the patient’s tissue, I believe that the infection can cause chronic inflammation in the joint tissue similar to an autoimmune disease. As an immunologist, I believe that giving these patients Gamma-globulin, which contains a range of antibodies to fight infection and suppress inflammation, is worthy to select patients. Gamma-globulin has been used for immune-deficient patients, but also for patients with unusual infections or autoimmune conditions, to ease the inflammation in the body. Formerly it was only available intravenously, but now we can give it by injection into the muscle. Initially, I will try a series of 6 injections with a patient to see if we are getting a response.

I also recommend anyone suspected of a tick bite or Lyme disease to be checked for other tick-related infections, such as Babesiosis, Ehrlichiosis and the Powasa virus — these infections tailgate along with the same tick as Lyme and can cause co-infections. It’s important to check as the treatment can differ.

The summer is over, but if joint pain and fatigue start affecting you…see your doctor as soon as possible and get tested.

CONNECT WITH US:
Mast Cells: How They Affect Vaccine, Drug and Food Allergies
Welcome to The Smartest Doctor in the Room. I’m your…