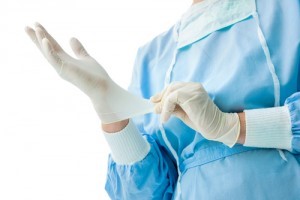 Latex is a natural rubber and latex products are primarily made from the rubber tree hevea brasiliensis. Latex is commonly thought of as being a contact allergen, which causes rashes (see our previous post on Allergic Rashes), however, it can also have more serious health implications.

The Serious Side Of Latex Allergy

In the 1990s a more serious symptom of latex allergy emerged. Dr. Dennis Ownby, at Henry Ford Hospital, had several cases of patients who went into anaphylaxis (allergic shock) after exposure to latex medical products. Several of the cases occurred after patients were having GI (gastrointestinal) tests for intestinal problems.

The cases were fascinating. One patient went into anaphylaxis while having a barium enema (a special X-Ray of the large intestine). At first, the radiologist doing the procedure thought it was due to the barium injected into the patient.

However, after carefully reviewing the timing of the reaction, he realized the barium had not been injected into the patient when the anaphylaxis happened! He was dumbfounded, and it wasn’t until he had a few cases of similar conditions that he realized it was the latex rubber catheter used to inject the barium that was the cause of the problem.

Once this latex allergy had been identified, more and more cases started to be diagnosed. Obvious cases were when children blew up rubber balloons and their lips swelled up. The not so humorous situations occurred when latex condoms caused phimosis (penile swelling) when using them for protection during sexual intercourse.

Who Is At Risk?

Certain groups of people are more at risk of latex allergy than the rest of the population. Healthcare workers (whether they are doctors, nurses or even aides) are at increased risk because they frequently wear protective latex gloves for their occupation.

Food allergies can also be a sign that you may be predisposed to latex allergy. The following foods are some of the more common food allergies that cross-react with latex rubber and can give warning of a potential severe latex allergy:

Our Own Doctor and Latex Allergy 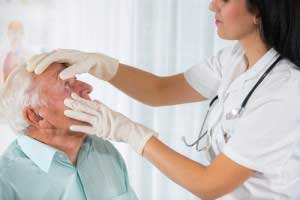 In our own practice, we had an interesting case with a doctor who practiced ophthalmology (a branch of medicine that deals with the anatomy, physiology, and diseases of the eye). The doctor was a vegetarian but she noticed she was developing many allergies to fruit and vegetables. She was allergic to bananas, kiwis and many other fruits, which made her diet almost impossible. She also mentioned that when she was in the operating room her eyes used to get moist and itchy when she first put on her surgical gloves. She thought this was due to the powder in the gloves and she was partly right. The powder in the gloves trapped some of the latex particles and made them airborne, which then affected her eyes. Fortunately, after conducting the allergy blood test, we discovered the problem was the latex in the gloves and made the diagnosis that she had a latex allergy.

There is currently no approved treatment for latex allergy (although some research has shown that allergy drops can work), so for now if you have this allergy just be super careful and take precautions.

The most important precaution for someone with a latex allergy is obviously to avoid having products that contain latex from touching their skin or mucous membranes. You should also make sure your doctor or dentist avoids examining you with latex products. For example, a dentist that is examining and operating on your mouth, or a gynecologist that does a vaginal exam should be fully aware you are latex allergic. They can then be sure to use another glove made from nitrile rather than gloves that contain latex.