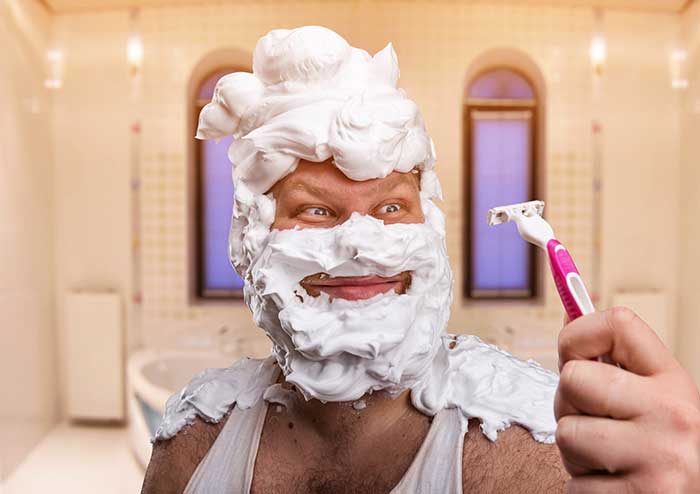 I just had two cases in the past week that reminded me that everyday hygiene tasks can have profound implications on our health. The two stories are very different in many ways but there is a common bond thaman-shaving.jpgt does link the two stories. I hope you will read these two stories and appreciate how they can impact your health or someone you care for.

A woman in her 50’s came to my office from a neighboring state. She had been diagnosed with large breast cancer the size of a grapefruit. The mass was so large that the surgeon couldn’t remove the tumor until she had radiation treatments to reduce the size. The patient had come to my office to receive IV vitamin treatments to boost her immunity while receiving radiation. We started her on the IV vitamin treatments which she tolerated very well. Concurrently, she was getting the radiation treatments in the morning and coming over to the office a few hours later.

After 3 days of the radiation treatments, she presented to my office unable to walk. Both her legs were covered with black blisters the size of quarters. At first, she thought a spider had bitten her at the motel she was staying at. I explained that it would have had to be multiple spiders to cause this widespread reaction. I was more concerned she had developed clots in her legs due to cancer breaking up from the radiation treatment. I had to send the patient to the hospital to get evaluated and treated for the clots or some type of infection.

My patient in his 40’s was a superb athlete. He competed in triathlons all over the country – and the world. When I saw him recently, he had just returned from a triathlon competition in South Africa. But he almost didn’t compete once he arrived. Despite the long 14-hour flight, my patient arrived in Johannesburg ready for the rigor of the triathlon. He had prepared for months with a coach on his swimming technique and put in endless hours on the road on his bike.

The morning of the race however he noticed his left knee was swollen and it was painful to walk let alone run. But being the warrior he was and the time and money he invested in this trip, he didn’t want anything to stop him. He saw a physician associated with the competition who put a needle in the knee to draw out any fluid inside but almost nothing came out. The doctor said he could try to run the race but to get medical attention back in the United States immediately. Incredibly, he finished the triathlon race – just in a much poorer time than he expected.

When he got back to New York, he saw his rheumatologist (he is followed for inflammatory arthritis and takes Humira) and was referred to an infectious disease specialist who diagnosed his swollen left knee and the redness around it as a dangerous Staphylococcus infection. He saw an infectious disease specialist who felt it was MRSA – methicillin-resistant Staphylococcus aureus that can be difficult to treat with many antibiotics. He was treated with a sulfur-based antibiotic for several weeks and the knee returned to normal size.

In both of these cases, the underlying cause of these rashes, boils, and swelling were the same – the simple razor blade!

The woman in case 1 recalled after a day in the hospital that she had shaved her legs the night before the blisters appeared on her legs.

The man in case 2 remembers he had shaven his legs the night before the race – as he and other bike racers typically do to prevent getting dirt on scrapes during the race.

The common bond in both of these patients was a relative immune impairment. The woman receiving radiation treatments had suppressed immunity. The gentleman although a triathlete was taking Humira, a biologic injectable medication that also suppresses the immune system.

Shaving with a blade, although a routine activity for all of us, can cause bacteria such as Staphylococcus to get into the deeper tissue and bloodstream and cause these dangerous reactions.

The take-home message: when shaving with a blade you must take into account your overall immunity – it’s a mini-surgical procedure! Also, shaving the lower extremities must be done with care, as the blood flow is not as good in most cases as the upper part of the body due to gravity.

My recommendation to my two patients here: next time you decide to shave your legs use an electric shaver!

Dr. Dean Mitchell, M.D. is a Board-Certified Allergist and Immunologist based out of NYC. He graduated from the Sackler School of Medicine and completed training at the Robert Cooke Allergy Institute in New York City. He is also a Clinical Assistant Professor of Clinical Immunology at Touro College of Osteopathic Medicine, a fellow of the American Academy of Allergy, Asthma and Immunology, and the author of Dr. Dean Mitchell’s Allergy and Asthma Solution: The Ultimate Program for Reversing Your Symptoms One Drop at a Time. Dr. Dean Mitchell, M.D. has also been featured in The New York Times, The Huffington Post, Fitness Magazine, Dr. Oz and News NY 1. Dr. Mitchell also hosts the podcast The Smartest Doctor in the Room – a combination of a lively, personal and in-depth interview with top healthcare specialists.